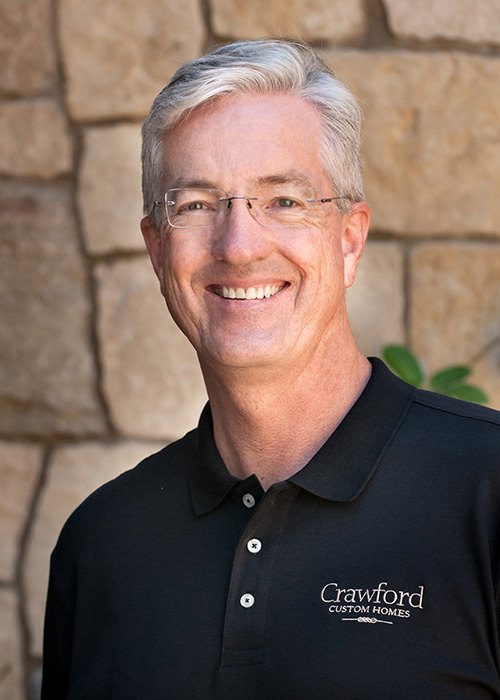 
Read More
As Vice President of Saddleback Savings and Loan Association, he was involved with loan origination, supervision of construction loan disbursements, construction site inspection and the supervision of a branch development program. Crawford Custom Homes has also acted as General Partner in various development projects. Mr. Crawford, through The Richard F. Crawford Company, has been responsible for finance, planning, accounting and construction matters for a dossier of exquisite residential estate properties.

Mr. Crawford is a graduate of the University of Southern California, where he received a Bachelor of Science in Business Administration with a major in finance and real estate, and was a member of the USC Business School Dean’s Advisory Board. He is a California licensed general contractor. His community activities include: Chairman Emeritus and Advisory Board Member of the Second Harvest Food Bank of Orange County and Chairman Emeritus and Advisory Board Member for SPIN (Serving People In Need), an organization that aids homeless individuals and families to become self-sufficient. 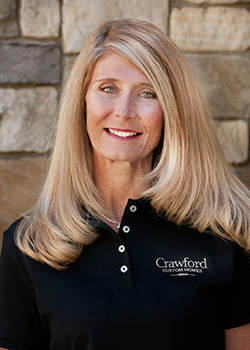 Kimberly SmithVice President, OperationsKimberly Smith comes from a tradition of construction, real estate and development. Coloring the cut and fill areas on her father’s grading plans and measuring herself against the giant tires of the excavating equipment were just a few of the seeds that took root during her childhood. As the eldest of four, Kimberly inherited her father’s love for the construction industry and his standards of hard work, integrity and responsibility.


Read More
Working for a construction development company during summer breaks from Pepperdine University, where she was pursuing a degree in business administration, Kimberly realized that the construction industry was truly where her heart was. After several years of working in the industry, with a focus on residential construction, she gained valuable knowledge and experience.

When Dick Crawford shared his vision to become Orange County’s premier custom homebuilder, she recognized that this company—and Dick’s strong sense of integrity and core values—would be her future. Twenty-four years later, Kimberly remains an integral part of Crawford Custom Homes. As Vice President of Operations, she is responsible for initiating and overseeing corporate policy, company operations, finances, and job site administration.
Kimberly served as project manager for Crawford’s entry into Home Aid’s Project Playhouse, Home Aid’s annual fund raiser to help build shelters for the homeless. Crawford’s playhouse entry won both the Grand award and the Craftsmanship award. Kimberly has supported the company’s commitment to Second Harvest Food Bank and to SPIN, and has served as Chair of SPIN’s annual dinner. She was a founding board member and president of the Orange County Triathlon Club and is a two-time Ironman triathlon finisher.

Project ManagementThe Project Managers at Crawford Custom Homes are among the most skilled and respected professionals in the industry. With no less than 20 years each building and supervising high-end residential projects, many have grown up learning the trades and are master craftsmen themselves.


Read More
Each embraces the values of our company at the highest level of integrity, quality and values. They genuinely care about the families they build for and they vest into each home as if it was their own.

From commencement to completion, our Project Managers oversee the complex construction process of every home. They evaluate subcontractors’ scope of work for thoroughness and competitive pricing to ensure that our clients get the best value for their investment. They collaborate to establish a realistic budget and create and manage the construction schedule. Our Project Mangers make recommendations to Dick Crawford, the design team and the owner to solve problems and partner with artisans and craftsmen to ensure projects are completed according to the impeccable standards of Crawford Custom Homes. Clients can expect continuous communication from their Project Managers throughout the homebuilding process with progress updates and exciting news about their new home.

AdministrationWith customer service as their cornerstone, our administrative staff provides exceptional support during the homebuilding process. Organized, efficient, friendly and helpful, they oversee the procedural details of every Crawford home project while applying their individual and collective expertise in accounting, banking and management. For our clients, this equates to meticulous auditing, precise reporting and billings that are as custom as our homes. The office staff also manages all financial and contractual details with our subcontractors. Their attitude of mutual respect fosters long-term relationships with the finest craftsmen; and their timely vendor payment process both protects project momentum and helps ensure integrity, efficiency and high morale on our home construction sites.